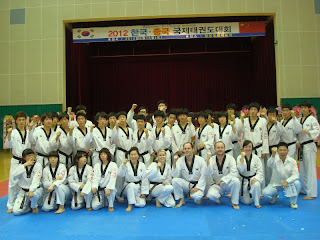 On Saturday David, myself, Shae, Adam and Suzi participated in a Taekwondo festival in Changnyeong. A group of fifty people, children and adults came from China. They are a Taekwondo School that visit Korea twice a year. Students from our Taekwondo Gym also visit China twice a year. This promgrame is set up so the children can interact with foreigners and share Taekwondo techniques. People also came from Seoul, Busan and other surrounding cities. The majority of  people were students from the local Changnyeong Taekwondo Schools and Changnyeong district. Overall there were around one thousand people attending. We got to watch many exciting Taekwondo performances as well as taking part ourselves. We performed yuk-jang Poomse 6 and Koryo.  A Chinese student performed Koryo with us.  It was incredibly nerve racking  but I was happy that I took part. David and I will be entered in a Taekwondo competition in November so this day was great practise! 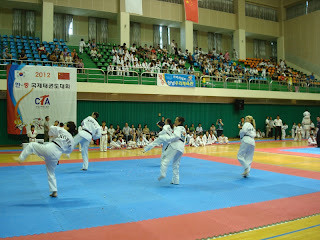 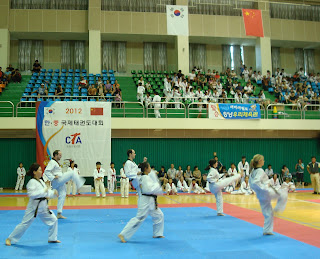 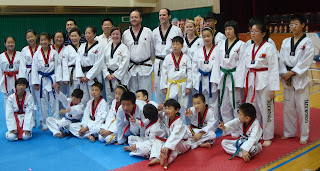 On Monday the fifty Chinese students came to CEV and we showed them around the school and gave them a mini English Village experience. The children were split up into classes and we each took them around the simulation rooms for a short lesson. All of the students were very energetic and happy. It was strange only being able to communicate with them in English. I kept on saying the odd Korean phrase but then realising they didn't understand! It was a really nice and interesting experience. It is always great when the schedule is a little different. 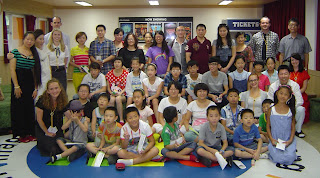 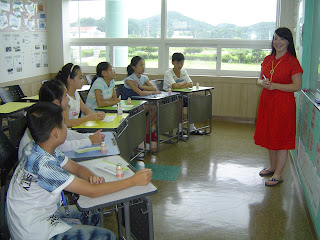 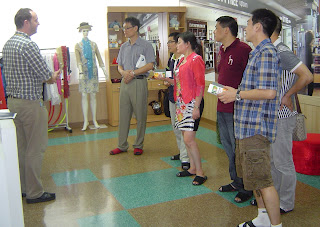 Also on Monday a local camera crew came to CEV to record a segment for a local TV station. First they recorded us teaching a few lessons then, I had a interview. Overall it wasn't too stressful but I am not looking forward to seeing or hearing the completed piece!
Posted by Becky & David at 7:57 PM