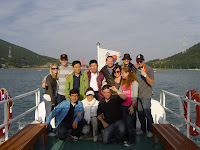 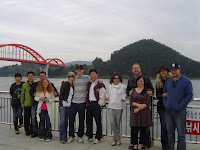 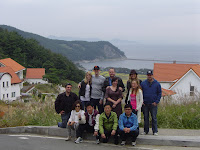 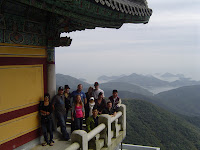 On Wednesday and Thursday our Korean bosses, Richard and Suzi took all of the staff from CEV on a two day trip to Namhae and Jinju. As this was a trip that was funded by the local government we all had to write memoirs about our experiences. Here is ours, as written by David...

Changnyeong English Village, Fall Workshop Trip.
David Moxon and Rebecca Rhone
Namhae and Jinju
2011
Day one: We all met up outside our apartment building at 9am. We loaded our bags onto one van and took our seats on another. We were in the van driven by Richard, we had Suzi, So-hee, Adam and Shae to ride with. Suzi had kindly prepared a snack pack for each of us. We set off quickly and we all at some fruit en route to our first stop. It took around 45 minutes to arrive at Chilseo service area where we met us with our school governor, Mr Lee. We played on a couple of arcade games before hitting the road once more. We soon arrived in Namhae, to access the island we had to drive over a beautiful bridge; Richard managed to find a place to park so we were able to take some pictures of the bridge.
The next stop on our itinerary was to a German themed village, this was wonderful to see, there were so many European style houses, Richard told us this was build for German-Korean citizens to live if they chose to retire in Korea. We had a walk around and again took some photographs before getting in the vans and zooming off to our next destination.
We drove up into the mountains on Namhae Island, we drove up some very steep roads but eventually arrived at a car park quite high in the mountains. From here we walked up the mountain for around 30 minutes, when we arrived at the top we were amazed at the temple we saw, it was so big and beautifully decorated. It was hard to believe that it could have been transported up here so long ago. Richard explained to us that this was once used by one of the kings of the Joseon dynasty to pray, this was over 1000 years ago. The temple felt like it had a great history to it. We took some more photos and had a bit of free time before walking down the mountain.
After walking up and down the hill, we were quite hungry, Richard and Suzi took us to a traditional restaurant, here we enjoyed a feast, we had soup, fish, pajeon, rice, kimchi, salad and more, it was delicious. We all left feeling satisfied before we loaded in to the van and went to our next destination.
Next we boarded a boat, we had the whole boat to ourselves, it was a large boat but there were only CEV staff members on board, we felt like VIPs. The boat took us out into the sea, we saw a lot of wildlife and we gave some snacks to the seagulls. The boat ride had some excellent views of the mountains and the wonderful coastline, we also had a look at one of the POSCO sites, it was good to see such a thriving industry. On the way back, Suzi put on some music and we all had a dance on the top deck of the boat as we sailed back into the harbor. The boat ride was a highlight of the trip for us.
After the boat ride, we went to Jinju, this is a town of 340,000 people located on the south coast. We were lucky enough to be visiting during their famous lantern festival. Everywhere was very busy but Richard had booked us rooms at the Valentine motel, we took around 30 minutes to freshen up before heading out to a restaurant. We ate Bulgogi jungul, which was amazing, it had meat and vegetables cooked in a delicious marinade. I think everybody enjoyed this very more. We felt well rested after eating and we put our burst of energy into going to a singing room. We all sung a few songs and everyone was very happy.
At just before 10 pm, Richard and Mr Lee said that it was time to go to the lantern festival, this was a 15 minute walk from our hotel along a lovely riverside path. We could see the lights of the lanterns in the distance, as we got closer; we were astounded at how many lanterns there were, there were so many designs, including many internationally themed designs. We spent a while exploring the lantern festival as well as taking pictures. We all left the festival feeling tired after a long days sightseeing, but extremely happy as we had had such a great day.
Day two: We slept very well and enjoyed staying in such a nice location, we all met in the lobby at 10 am, ready for some more sightseeing before heading back home. Our first stop was to Emart to have breakfast, we had a traditional Korean breakfast to keep us energized for the day to come. After enjoying breakfast we went on a walk to Jinju fortress. This was not a long walk from Emart. We arrived at the castle and took a group photo. We then had some free time to look around the castle and explore the Jinju national museum, which is located within the castle walls. We saw many interesting things as well as more lanterns. We had the opportunity to try on some period clothing as well as learn some defensive moves with a traditional weapon.
After looking around the castle, Richard treated us all to ice creams, we ate our ice creams as we walked back to the van.
We enjoyed the workshop trip very much and we felt privileged to have the opportunity to visit so many wonderful places.
Posted by Becky & David at 10:41 PM